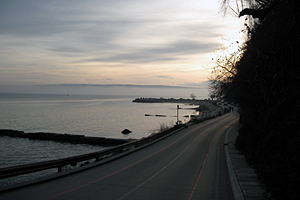 Varna is Bulgaria’s third-largest city. It is the biggest city on the Black Sea Cost and maritime capital of the country. Varna is extremely interesting and cosmopolitan city and definitely is the highlight of the region.

Very close to each other you will find the city port, naval base and seaside resort. Especially during the summer season, Varna becomes an appealing place to stay. It has thousands years long history, an enormous park called“ The Sea Garden” to walk around and a golden sand beach to lounge on.

Varna is dynamic and fast-growing Bulgarian city experienced a real estate boom in recent years. The city is famous with its large Roman baths complex, the Archaeological museum, as well as a lively cultural and club scene. There are many art festivals during the Summer in Varna you can also visit art galleries, a dolphinarium, The Naval museum.

General affiliates and accommodation in Varna 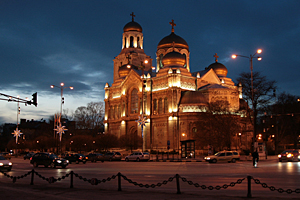 The Cathedral in Varna

Varna is the biggest city on the Black Sea Coast. It’s situated in the North-Eastern part of Bulgaria (280 km from Plovdiv, 445 km from Sofia and 90 km from Burgas), built over the remnants of the ancient Romanian city Odessa. Even if Odessa is the oldest city know, there are historical and cultural evidences that there actually were other settlers on these lands.

Let’s not forget that the oldest gold in the world was found in Varna. The city has an airport with regular flights to Europe and many summer flights to Europe and East Asia. The port is mostly for transportation of goods but once a month there are luxurious cruisers that stop at Varna for a day or two. The city has many hotels and apartments for rent, because of the many students that live and work there. In the summer the tourists can rent the apartments if they’re not interested in hotels.

Varna from above - video with drone 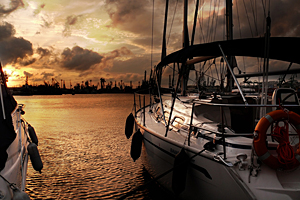 Varna is the summer capital of Bulgaria and therefore the nightlife is generous – Varna offers bars, restaurants and discos with different choice of music. Almost all of the summer discos are situated on the 1 st alley – it’s a long pedestrian alley that goes from the port via the centre to the south end of Varna, the Pochivka bus stop.

Long with the 1 st alley goes the Seaside Garden. The park has many well kept asphalt alleys where bikes or skates can be ridden. There are many vast meadows where people can make picnics, sportsmen can practice, and children can play.
The lovers of excitement can try the windsurf school on the 1 st alley or dare the bungee jumps at the Asparuhovo bridge that are available every summer day and in the weekend during the other seasons. The municipal swimming pool is in the centre of Varna and is open all year long. The Sport Palace is one of the biggest on the Balkan Peninsula and offers many sports and activities to the youngsters. 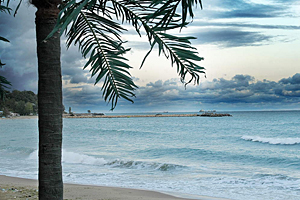 Varna’s Zoo is situated in the heart of the Seaside Garden. It’s actually very small, but in the centre of it, there’s a pond, so it makes a really lovely place to take a walk and rest. The dolphinarium is also situated in the Seaside Garden with shows twice a day except for Mondays. Be aware of the signs; they are spelled "Dolfinarium". In the park there’s also an Aquarium with different species and museum.
Except for the places where people can meet wildlife, Varna offers many places where tourists can experience history. Near the Varna Aquarium there’s a Naval Museum outside of which HSM “Drazki” stands and can be explored with a guide. Another interesting museum is the Museum of History and Archaeology that often hosts different exhibitions from all over the world, and where is conserved the oldest gold ever found. Varna also has a Museum of Puppets that’s near the Puppet Theatre.

All over Varna there are remnants from the Romanian Empire, mostly in the central part near the Marine Garden. Most of them are fenced, but the well conserved parts of Romanian Baths can be visited as regular museum. Only 3 km away from the city the visitors can admire the “Pobiti kamani” – it’s a fossil forest from boulders in different shapes. 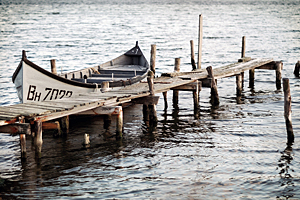 Another beautiful spot is the Aladzha Monastery – an old monastery built in a rock hill, and the monks used the caves for cells. The monastery is situated in the Golden Sands Reservation and can be accessed by car or by foot directly from the resort itself. The paths in the resort are numerous; some of them lead to meadows with fountains, and one of them leads even to the village of Kranevo.

Opposite the entrance of the St. Constantine and Helena resort there’s an Eco Park where people can havebarbecue, play games or just take a walk around the small pond or the rosary. There are too several traces from the Romans. In the Eco Park the Annual Republic Championship in Equestrian. 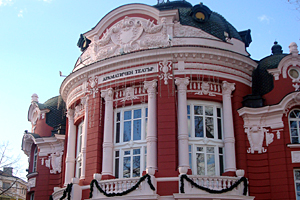 Hotels, restaurants and shopping in Varna

According to Trip Advisor the best hotels in Varna are:

The most desired restaurants according to Trip Advisor:

Varna is a city that combines unique architectural and historical sites, beautiful scenery with all the urban amenities - hotels, restaurants, shops, beauty studios and cinema to make your stay there unforgettable.